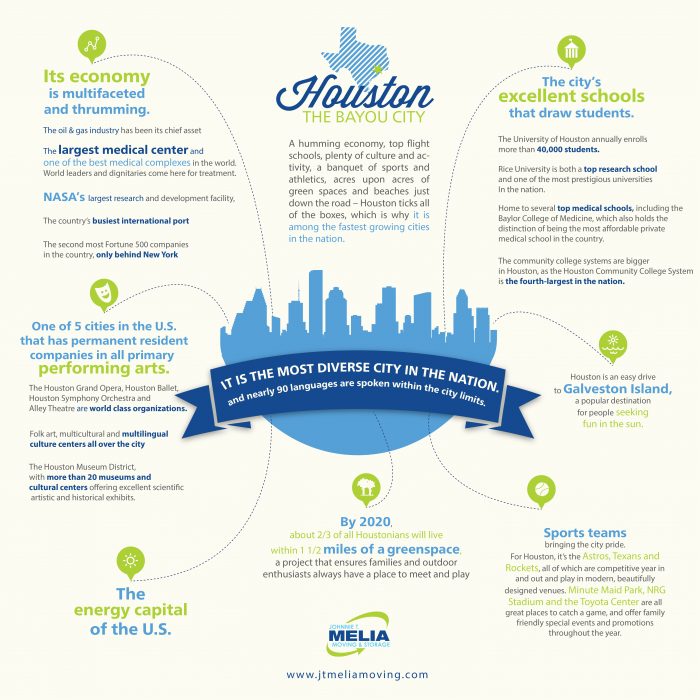 It may seem strange to suggest that a city the size of Houston, a city 6.5 million strong, could be considered a secret, but at the national level, it just may be. In fact, the Bayou City has everything one could want from a major metropolitan area, and then quite a bit more. A humming economy, top flight schools, plenty of culture and activity, a banquet of sports and athletics, acres upon acres of green spaces, and beaches just down the road – Houston ticks all of the boxes, which is why it is among the fastest growing cities in the nation.

A Capital of Commerce

Houston’s economy has long been part of the city’s larger story, and it still is. As a commercial powerhouse, the Bayou City has weathered withering economic conditions time and time again. During and following the Great Recession of the late 2000s, Houston continued to add jobs at an impressive rate and there’s no sign of the growth slowing. According to the U.S. Bureau of Labor Statistics, Houston’s job growth was double the nation’s average from July 2012 to 2013, and has doubled the jobs it lost during the Great Recession.

But what powers the Houston economy? An assortment of industries, and here’s a snapshot:

Houston is still the Energy Capital of the World, but its economy is multifaceted and thrumming.

The economy is what draws professionals, but it’s the city’s excellent schools that draw students. Beyond its hundreds of elementary and secondary schools, Houston maintains a network of respected universities. They include:

A Center for Culture

Of course, there is more to life than just work and school, and when it’s time to take in a little culture, Houston can provide enough options for a lifetime. The Bayou City is just one of five cities in the U.S. that has permanent resident companies in all primary performing arts, which are:

All are world class organizations, but there is much more. There are thriving community and folk art centers all over the city, including multicultural and multilingual culture centers. Houston, after all, is the most diverse city in the nation, and nearly 90 languages are spoken within the city limits, confirmed by the 2010 U.S. Census.

The Museum District welcomes millions of visitors every year (The Houston Zoo sees more than 2 million visitors alone annually) and the city’s museums also offer free days for families looking to fill up an afternoon.

An Area for Athletics

Part of the reason that Houston’s museums are so developed is because there is a real drive to improve every aspect of the city. Nowhere is this more apparent than in the rapid creation of green spaces in the Bayou City. Houston already has Memorial Park, which is the largest urban park in Texas, and is set to add thousands of acres of parks and trails over the next five years. By 2020, about 2/3 of all Houstonians will live within 1 1/2 miles of greenspace, a project that ensures families and outdoor enthusiasts always have a place to meet and play. And for those that want to escape the city occasionally, Houston is an easy drive to Galveston Island, a popular destination for people seeking fun in the sun and surf.

And no metropolitan is complete without a few sports teams bringing the city pride. For Houston, it’s the Texans, Rockets, Dynamo and Astros, all of which are competitive year in and out and play in modern, beautifully designed venues. Minute Maid Park, NRG Stadium and the Toyota Center are all great places to catch a game, and offer family friendly special events and promotions.

Houston may still be a closely guarded secret for much of the country, but for the 6.5 million that wake up every day in the Bayou City, they enjoy one of the nation’s greatest cultural and commercial centers.